DISCLAIMER: All the photographs in this post were shot either with a prosumer camera (Canon SX30 IS) or with my iPhone. DSLR cameras were not permitted into the fest. So please excuse the quality!

So last weekend, I attended my first music fest ever – Lollapalooza 2011 in Chicago! And it was an *incredible* experience, to say the least.

About two months back, my friend suggested this idea and within a couple of days, we bought flight tickets to Chicago and 3-day passes to the fest. It was an impulsive decision (very much unlike me) and I’m just glad I went with the flow. Lollapalooza took place at Grant Park from Aug 5th thru Aug 7th.

Day 1:
We arrived at downtown Chicago around 1pm. It took us about half an hour to find a parking garage that was reasonably expensive. We then walked towards Grant Park and stopped near the iconic Bean. 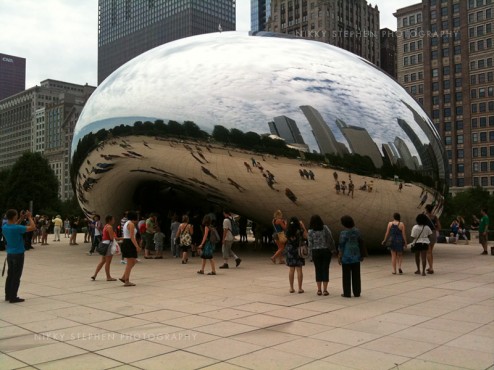 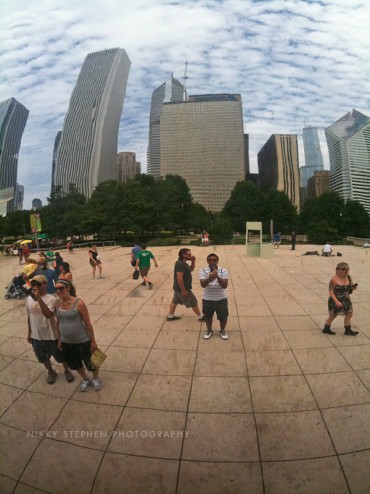 After loitering a bit, we found our way to one of the two entrances to the fest and saw an enormous crowd in front of us. After standing in the supposed-to-be-queues, we got our 3-day pass wristbands! Weee! The security guy hardly frisked my bag. He just touched it for the sake of doing it. I could have easily brought my DSLR in! But then again, my 70-200 is not really the most inconspicuous lens! 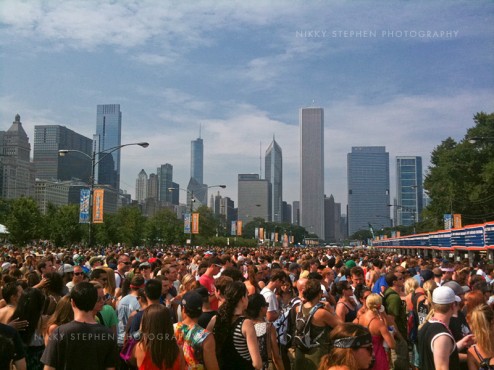 It was HOT in Chicago – around the late 80s! Such a huge change from the Seattle summer. There is no summer in Seattle; just a few days of not so cold weather! We immediately walked towards the Bud Light Stage where the Grace Potter and the Nocturnals were playing. They sounded really tight with the lead vocalist jumping around and running all over the place, but unfortunately that was the last song of their set. 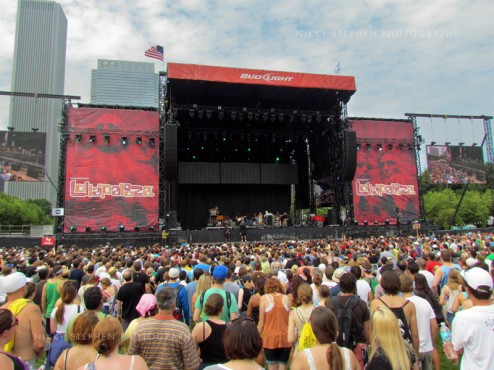 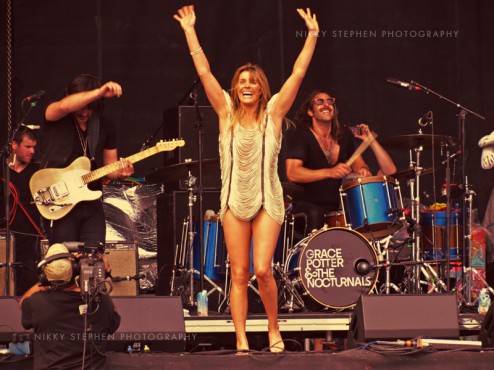 The next venue was the Google+ Stage where Le Butcherettes playing. She was singing in some strange tones and sounded really weird! Definitely not my type! 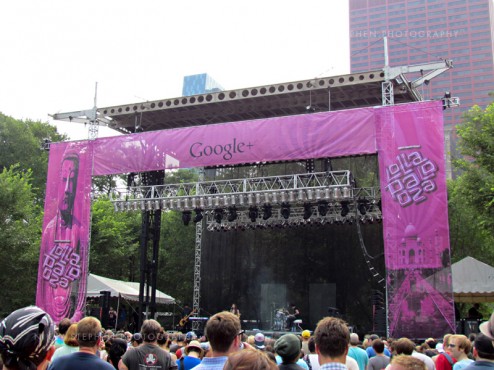 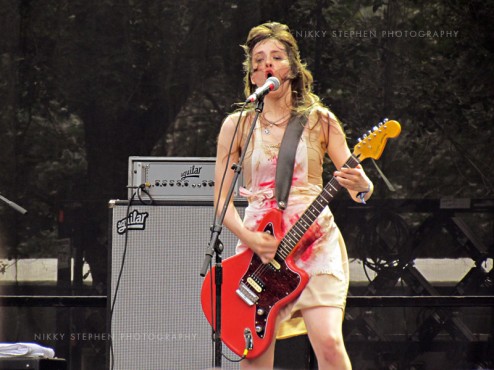 We stayed there for like 5 min and headed towards the next place where we could hear some music. 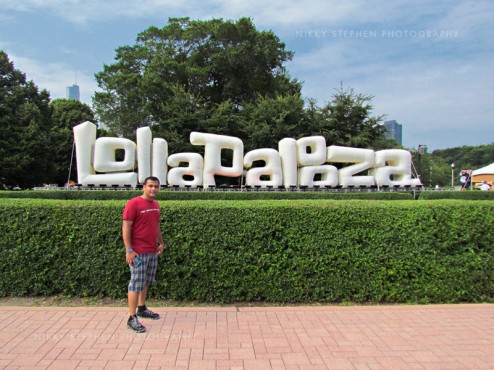 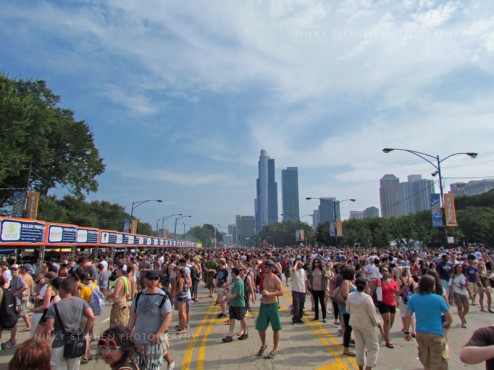 We landed at the Perry’s Tent where they play only IDM. This place was like a rave party all day long! It was the most happening place and was easily my most favorite venue in the fest. The D&B/electro house/dubstep artist Feed Me was playing their set and was pretty good! The crowd was mostly teens and young adults all drunk and/or smoking weed or some other stuff. I got a taste of what Woodstock might have been! 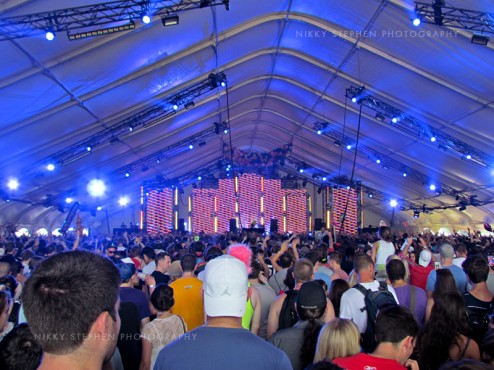 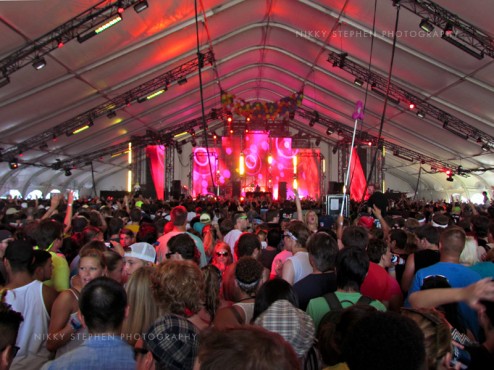 Grant Park has an amazing view of the beautiful Chicago skyline. The bands playing on the outdoor stages had the best views! 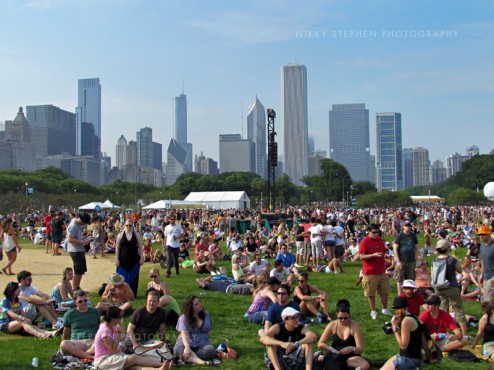 After a while at Perry’s Tent, we moved on and saw the trio Two Doors Cinema Club play at the Sony Stage. We stayed for a few songs, but they were too pop-ish for us. There was a huge crowd for this band though. Next up, was the immensely popular superband A Perfect Circle! Now they had a HUGE crowd, probably around 30,000 strong! But they were a big letdown. The band members were all fixed to their positions and hardly moved an inch. The lead vocalist, Maynard James Keenan (who also leads another superband ‘Tool’), stood at the back of the stage and showed absolutely no showmanship. I hate it say it, but A Perfect Circle‘s show was BORING. My friend was saying that they are better suited for indoor shows! 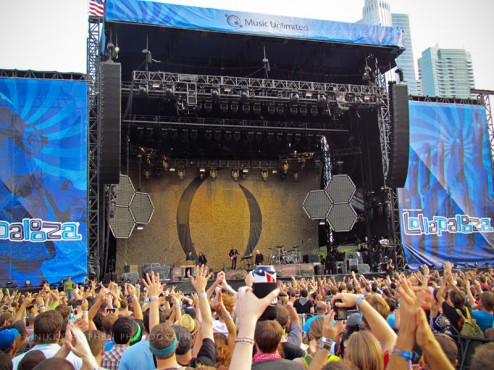 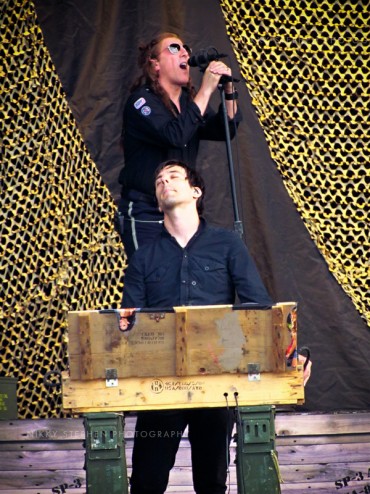 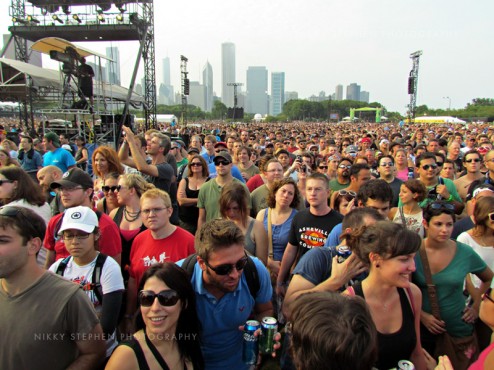 After about half an hour through their show, we rushed back to Perry’s Tent to catch a glimpse of my current favorite IDM artist Skrillex. Oh man, dubstep is so sick! I was upset that we didn’t come here earlier!! Anyways, we had a great time there!

Finally, around 7:30pm, we grabbed some pizza and headed towards the other end of the park to find a good spot to watch Coldplay. We were tossed between watching Coldplay or Muse, but we ended up watching Coldplay. Even though we reached around 45 min prior to the show, we could only manage a spot almost a 100 metres away from the stage! This was Coldplay’s first ever Lollapalooza appearance and boy, did they deliver! They began with an massive laser show mixed with firecrackers and lots of crazy graphics and stuff. Vocalist Chris Martin was an amazing performer and owned the entire stage. He ran, he jumped, he played the guitars, he played the piano, he THREW a couple of guitars and of course he sang with his signature falsetto. Coldplay might not be a true rock band, but who cares, you just cannot dislike their songs! It was one of the best concerts I’ve attended. 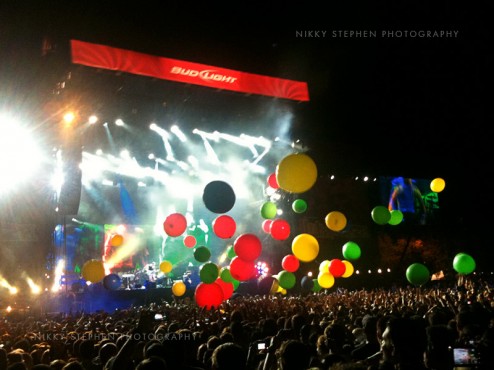 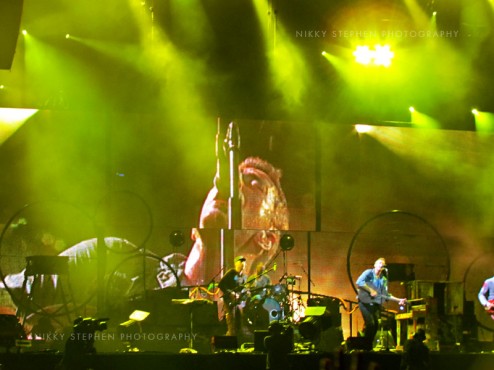 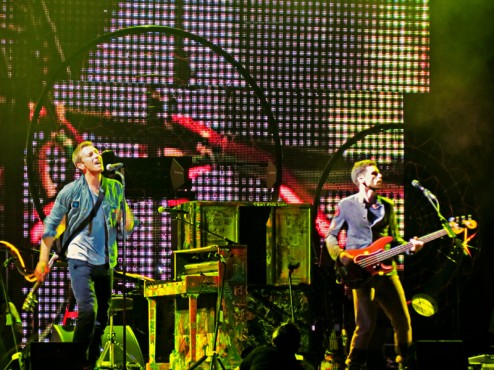 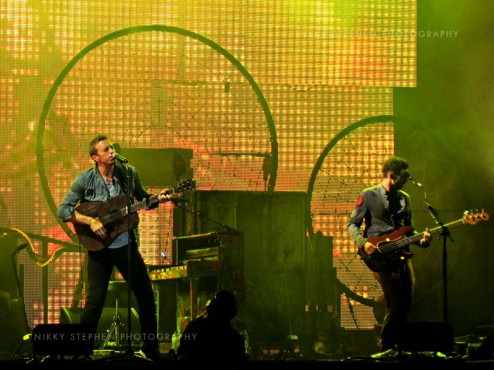 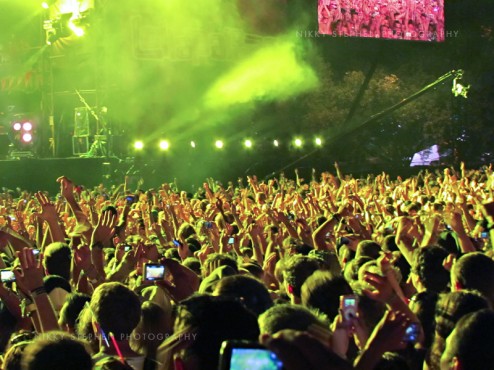 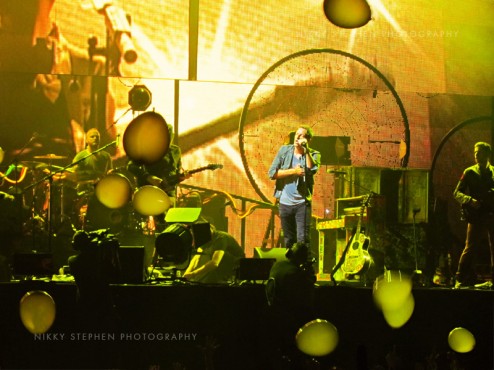 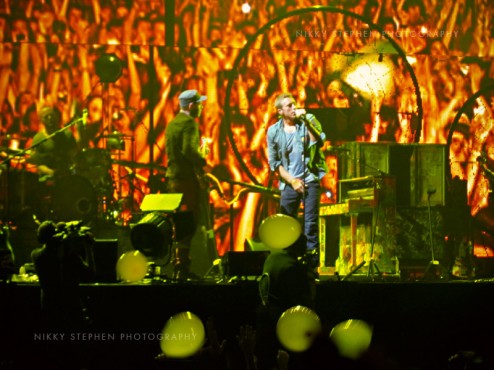 Day 2:
Uhm… I didn’t really attend Day 2 of Lollapalooza. I was hanging with my friends at the beach and around the Michigan area. Artists like Eminem, Skylar Grey, My Morning Jacket and the Deftones played on Saturday.

Day 3:
Day 3 was a huge contrast from Day 1. We reached Grant Park only after 5pm and started off by listening to the Artic Monkeys. The weather was all good until around 6pm when we experienced the first of the two thunderstorms to hit that day! It just rained and rained. We were COMPLETELY drenched. We fled the outdoor stage to Perry’s Tent hoping to find some shelter, and we did. The electronica artist playing there got lucky and had a huge crowd due to the rain! The ground got all muddy and slushy. Everyone was wet and dirty, literally. 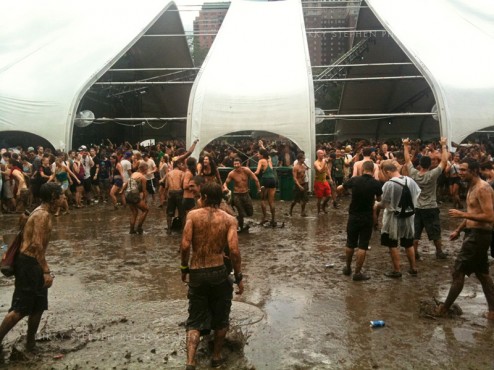 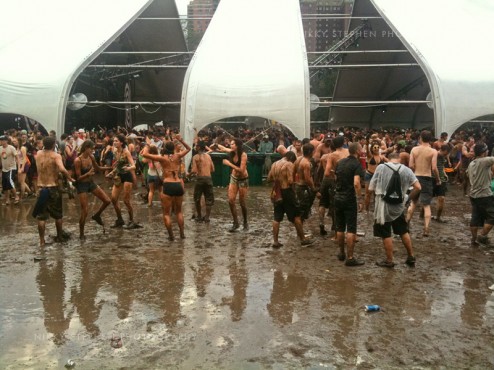 Night came and it was all about the Foo Fighters! They gave us a truly kickass show led upfront by Dave Grohl. 5 min into their show, the thunderstorms struck again. Everyone got completely drenched. The muddy ground became even more muddier and I felt like I was sinking! But Dave Grohl and gang pushed themselves and sang tons of songs one after the other all through the rain. The best part of the show was when they played ‘My Hero’ and the entire audience was singing the chorus while it was pouring! They belted a lot of their new stuff as well as their classics. It was indeed a truly memorable experience. 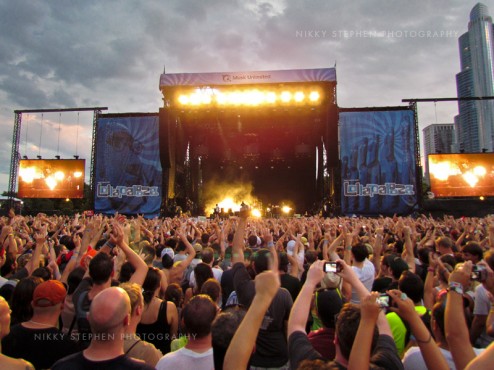 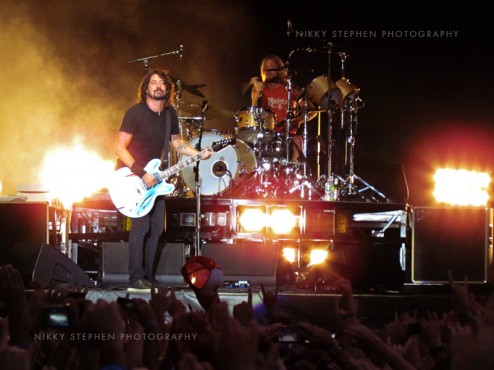 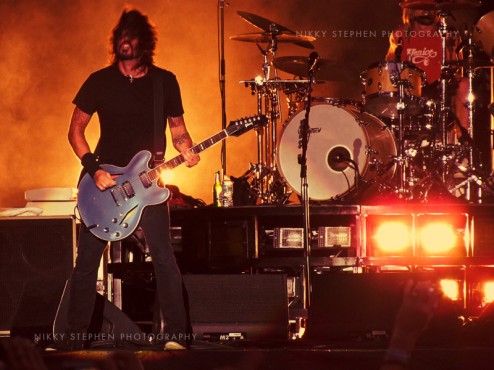 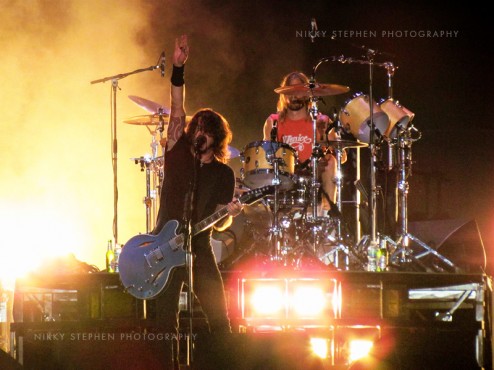 On the other end of the park, the super popular artist Deadmau5 was playing. I didn’t get to see the mouse since we had to rush out to catch our last train back to our temporary residences!

You can view more photographs below: